I am home. I hit the Colorado border about 1pm (MDT) and was at Ray's by 4pm. It was glorious to see the mountains. They are snow covered and lined the whole horizon by the time I reached Sterling, CO. Colorado Springs looks much the same but the grandkids have all grown and Archer is trying (so far unsuccessfully) to walk.

This has been the most glorious five month experience. I have learned a lot about myself as well as a wealth of information, insight, and appreciation for our ancestors. This trip encompassed

Fiona the GPS is a bit battered but still functioning. My car has survived despite being loaded to the gills. I highly recommend everyone designing a sabbatical experience -investing in your own personal passion. Many thanks to all of you who put me up, gave me encouragement, supported my excentricities, and read my blog. I couldn't have done this without you.

Tomorrow, I move into my new home. Life will return to "normal" but hopefully with more balance. I will spend the next year compiling stories and creating some books. A completely documented family history (citations and copies of all documentation will come later).

I will sign off - but keep in touch. This has been a life altering experience.

The day began with cold and clouds but no precipitation. The clouds remained until I crossed the Mississipi about 1pm when they lifted and I got lovely blue skies and high clouds. Crossing the big river at Bettendorf, IA was as exciting as it was 5 months ago at Hannibal, MO. This time I am thrilled to be going home to see family, reenergized for my job and anxious to get writing some family stories.

The 9 hour drive went easily fueled by two tanks of gas, a book on tape, lively music, diet coke and ice tea. A blue, pink and white sunset illuminated the sky about 5:30 as I crossed the Missouri River from Council Bluffs to Omaha. I arrived safely in my hotel in Lincoln, Nebraska before 7pm. Tomorrow I hope to be off early. I would like to be in Colorado Springs before dark.
Posted by Margaret on the Road at 5:59 PM No comments:

A cool day in Chicago but no snow or rain. I'm keeping my fingers crossed that it will last a few more days.

Lois and I spent nearly 6 hours at the Art Institute. We didn't get through all the exhibits but had a fabulous time looking at Impressionists, modern art, Asian pieces, and miniatures. The miniatures were done in the 30s by a woman from Chicago. She was very interested in art history and architecture and designed various room interiors (n=30?) based on location (e.g., Connecticut), setting (e.g., dining room), and period (e.g. 1760). She then hired artisans to create the miniature furniture, rugs, wall decor, portraits, and accessories to furnish the room. The rugs, for example, were all needle pointed in silk - 40 stitches to the inch. Each room allowed you to look through a doorway into another furnished space (e.g. from a living room into the entry hall) and out the "windows" to a garden, lake, or street scene. Each room was exquisite. Obviously these exhibits were my favorite.

Shortly, Pam, Jay and I are going out to dinner. Lois is staying home and entertaining her granddaughter Alex. We should all have a good evening. Tomorrow I head for home!
Posted by Margaret on the Road at 3:51 PM No comments:

Brrr. There was ice on the windshield this morning. Best benefit of my new house - I have a garage for the first time in 15 years!!
I made the drive from E. Lansing to Chicago in about 4.5 hours with a stop at an outlet mall (no tops but I did find a belt). I managed to follow ALL of Fiona's directions correctly and arrived unscathed at Aunt Lois'. We had a lovely lunch (Lois is the queen of gracious dining) and spent the rest of the afternoon and evening nattering away.
Late in the afternoon Jay came home and we walked over to the fitness center (such a euphemism for a grand facility) for a solid 45 minute work out. This was a good effort but made little dent in the calories from Lois' lovely dinner. Hummm - more workout in the morning I think.
Meanwhile, Lois and I rummaged through various old collections and came upon a college scrapbook from my grandmother. The years were 1916-1918 and the scrap book includes letters from friends, programs from plays, opera, etc. she saw, valentines, goofy jokes, the college newspaper, postcards and other miscellany that is not that dissimilar from what many of us collected to document our teenage years. She definitely had a wacky sense of humor. I also made a copy of a tintype of gg Davenport and his parents which must have been taken about 1866. Cousins Bill and David - you haven't fallen far from the tree. 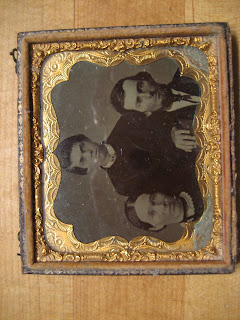 Tomorrow, Lois and I are off to the Art Institute. Should be great fun.
Posted by Margaret on the Road at 8:45 PM No comments:

Just a short blog tonight. I am including a photo of 65 University Drive in East Lansing. This is house grandpa and grandma Tukey purchased in 1945 when they moved from Geneva, NY to E. Lansing so grandpa could assume the duties of Hort. Dept. Chair at MSU. It is the home where Aunt Ann spent most of her growing up and where Dad created a bedroom for himself in the attic when he came home from the war. 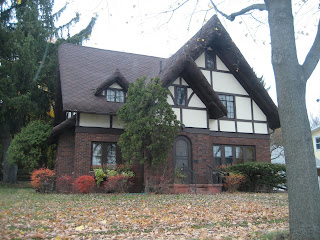 Ann and I spent a great morning together. We hit a thrift shop at a local hospital where I finally found a pair of cuff links for a reasonable price (still looking for a belt). Then it was off to the Michigan State Library and Archives. Ann did some research for a friend of Aunt Louise's. I began the search for gggCharles Richardson. He moved frequently. We know he was an early (1847) pioneer in Jamestown, Michigan. He moved north in 1875 to purchase land in a neighboring county and today I found the land record. Yea! However, where he died has remained a mystery. Wife Eliza is buried in Jamestown. Charles did not die in Jamestown. Neither did he die in Boston, MI or Evart, MI as reported from other sources.
After a nice lunch, Ann went home to work on materials for her class and I returned to search all the library's records for Ottawa, Oceola, Muskegon and Newaygo counties. No luck finding death records, burial records, anything on early settlers, etc. About 3pm I headed for the Archives. On microfilm were death indices. After a little searching, I found Charles. He died, as our records indicated, on Sept. 18, 1891 - in Barton, Newaygo County, Michigan. There still is no listing (that I can find) for his burial in a cemetery but we at least have narrowed the location of his death. My guess is that he died away from family and may be buried in an anonymous grave or on his farm. His death records list his occupation as farmer and the names of his parents as "unknown" - highly unlikely if he was living close to children. His wanderlust (and long years with lots of children) probably meant he enjoyed is solitude which makes him a bit unknown to later generations.
Tomorrow morning I leave for Chicago. Lois, Pam and Jay have activities already planned for tomorrow afternoon and Wednesday. Then I head for home Thursday morning. Amazing.
Posted by Margaret on the Road at 6:47 PM No comments: 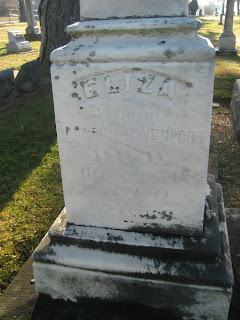 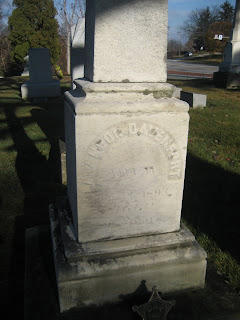 I realized that I posted my log last night with out the traditional cemetery photos. Here is the marker for Alanson and Eliza Davenport.

However, the best marker in the cemery goes to Basel Trombly. No he is not related but I loved the creativity. 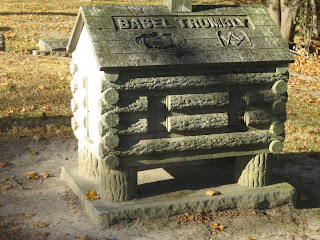 I left Ohio late this morning arriving easily in East Lansing, Michigan by 2pm. Aunt Ann and Uncle Michael look great. Ann and I ran a few errands but mostly spent the afternoon and evening talking nonstop. Tomorrow I have conned her into taking me to a consignment shop to find a new belt and then off to the Michigan Archives to find a cemetery listing for Charles Richardson - we hope.
The weather has turned cold and I am grateful for a warm coat. The skies were gray all day but no rain or snow. It should be warmer tomorrow - hopefully.

Posted by Margaret on the Road at 6:38 PM No comments:

I had a lovely sleep in this morning but was still off to Fort Meigs cemetery in Perrysburg by 9am. Thank goodness I had a reasonable description of the monument for Alanson and Eliza Middaugh Davenport (3ggs). I found it after only 15 minutes. In this case it was good that I knew one of their children married Christopher Hum because there was a large Hum monument that was easy to spot. The white Davenport obelisk is in good shape even though the lettering is fading. Alanson and Eliza are buried together with their son William next to them under a separate marker (he died early at age 47). Alanson had a G.A.R. military marker but I can't imagine he was in the Civil War. He would have been 55 years old in 1861. It may be that the marker should have been next to William's grave since he would have been 20 in 1862 - more appropriate for enlistment.

I then tried to visit a historic village on the Maumee River but evidently it is closed for the winter. Ditto with the Wood County Historical Society. I guess it is a good thing I am headed home. I spent the afternoon at the Wood County Public Library in Bowling Green. The historical society keeps many of its records there so I ended up with surname files and a variety of publications to investigate.

My searches were pretty fruitless. There appears to be no will or probate record for Alanson or Eliza or any of their children (in Wood County). Alanson was living with his son Newman at the time of his death so there may not have been enough property to divide. Alanson, according to the obituary I found, moved from Huron County in 1842 and purchased farm land. It may be that Newman took over the farm thus the deed had already transferred by the time Alanson died in 1893 at age 86.

The rest of the afternoon was spent walking and relaxing. I will head for E. Lansing, MI tomorrow morning.
Posted by Margaret on the Road at 5:31 PM No comments:

Margaret on the Road
United States